It’s that time again, Football Manager has been released and like last year my first save will be with the club I support, Man Utd. Unlike last year, however, I will actually play the save longer than a couple of in game months.

I start by blitzing through the pre season.

Overall it went quite well with the only loss coming in what is the glorified friendly that is the UEFA Super Cup. Formations such as the 4-3-1-2 and the standard 4-2-3-1 were used and going on what I saw the 4-2-3-1 will be what I start with on opening day. Before then though Jesse Lingard will be offered to clubs because I don’t want him to be honest. He gets a “deserved” move to… PSG.

I start looking at wingers to replace Lingard and I’m thinking either Inaki Williams or Gelson Martins but before I can bring anyone in we have the start of the Premier League to deal with. 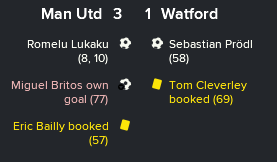 Decent start at Old Trafford, we dominate what is a good Watford side these days. Lukaku got his first 2 league goals for us and hopefully will continue in that vain.

Next up we go away to Stoke and have a chance to answer that tired old question. Can we do it on a mild day in Stoke? The answer to that question is…

No, we fucking can’t… 3-0… it’s a bit embarrassing really. Played awfully if you couldn’t tell, created no clear cut chances or even half chances. Stoke deserved the win, the 3-0 win… oh God.

With West Brom coming up I expect better from my side but before then we get to bring in a player.

It’s a lot of money, some would say that I’ve over spent there and to that, I say, Yes… I have. He will be on the bench for the West Brom game and will come on to play right wing.

He came on and didn’t play well but we were already winning at that point, Lukaku headed down a Mata free kick and Pogba’s half volley found the bottom corner. West Brom offered very little going forward and we missed a good number of chances but pleased to get the 3 points.

We make no more transfers despite our interest in some of the young English talents like Ben Davies and Ryan Sessegnon. No one else is sold either so we finish the month with the Champions League draw.

It’s a favorable draw, we should go through quite comfortably but then we did get beat 3-0 by Stoke so who knows.

September starts with 4 away games in a row then we face potential title rivals in Chelsea and Tottenham. It’s going to be a tough month but looking at it I’d say 8 or 9 points in the league I would be happy with. Should win the 2 European games and progress in the Carabao Cup.

Tune in… or whatever next time when things will go a lot worse then I expect.

You Are Not So Smart
AmbiGaming

Understanding Virtual Worlds Through a Lens of Reality

A Washed-Up Athlete with a love for video games. Video Games, Football, and whatever else comes to mind!

Seem to have forsaken chronicling the virtual multiverse in order to develop games...OH WELL!

Art as Games
From Eleven, One