As a massive Arsenal fan I am used to crushing disappointment, but nothing could prepare me for last summer. Two disappointing draws, one fairly decent win (although in retrospect… it was just Wales…) and a defeat to Iceland that made Brexit look like a tactical move to avoid having to go back into school to face ridicule.

I am only just healing from that loss, I was in disbelief for around a week, I shouldn’t of been. Like you all I believe I could of maybe done better… except unlike you I can, and I’m going to prove it, on Football Manager.

So, naturally I contacted the FA , said I bet I could bring football home, told them I had no previous dodgy dealings in football on account of having no experience, and finally, the clincher, that I am a tactical genius and I won’t quit the save till I win something (or get fired). Of course, they hired me instantly and set out their expectations. 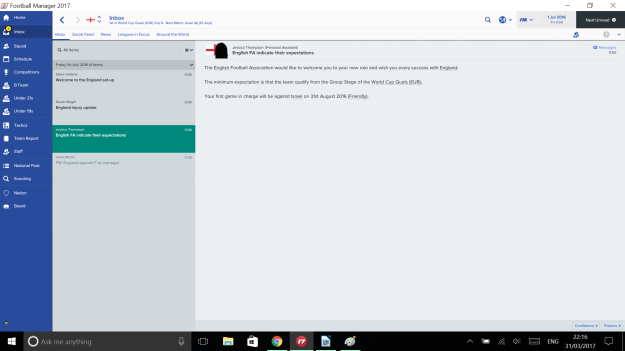 Reasonable, I intend to do a lot more than just qualify but let’s see, it’s early days. Our World Cup qualifying group is fairly straightforward on paper: Slovenia, Lithuania, Slovakia, Malta and Scotland. Two decent teams in Slovenia and Slovakia, the rest should be straight forward, Lithuania could be okay, Malta a push over and Scotland… well…

Next, tactics. England’s reputation for tactics in the past has been… ropey? Seemingly lacking in identity for the longest time. It seems ever since 4-4-2 has been out of vogue we have gotten lost. I’m not going to move mountains here (yet) I’m going to go with a simple 4-3-3 and 4-2-3-1. Down the line I may look to move the 4-3-3 into a 3-4-3 as per current tactical fashion thanks to Antonio Conte. 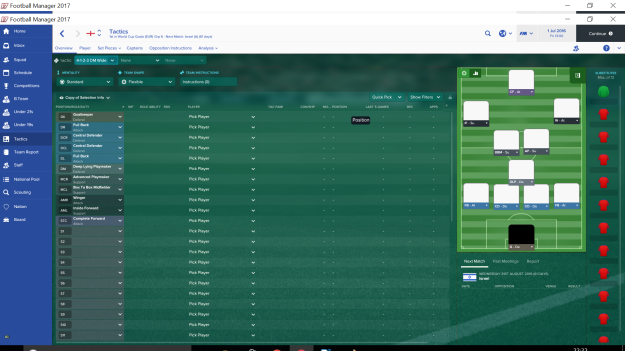 For our play style we will focus on dictating the game for the qualifiers as we should be a class above our opponents. For this we will be mainly sticking to our 4-2-3-1 shape, with a control mentality. The idea here is to keep hold of the ball, and force the other team to turn over the ball in dangerous areas. Moving the ball slightly slower may be a good idea as we look to play narrow, allowing space for our athletic full backs to bomb on in the final third, but we will play this by ear as moving the ball too slow may allow more defensive teams to hold their shape.

How do I get those dozy gits to understand this? ‘Cos I don’t

The squad is usually the first thing people will think about with England, I believe most of the time this is a faulty approach, particularly due to our relative mediocrity amongst the worlds top teams. Instead I think it is best to clearly define how you want the team to play, and then approach from there. If England had a player that was good enough to base our team solely around, this approach would be naive, but for now we do not (although, and this pains me to say, Alli and Kane may be those men in time).

For now we have this squad. Not too many controversial calls, Walcott is on because I am a biased man, Wilshere is on due to a lack of players I feel can play Deep Lying Playmaker in this system, Henderson will also be tried in this role, Lingard is in at inside forward on the left wing for now, although I like Sterling for this role also.

All places are up for grabs…

So, onto Isreal, my first game at the helm. It’s away in Isreal, never been there so will look to pick up a bit of the culture before I go, bring a gift or two, since I have fifty days to wait before the game… International management is pretty cushty all things considered.

In this long wait the world rankings have come in, we are thirteenth, one below Wales…

I’m confident we can correct that, or more likely Wales will screw it all up over the next few months. Oh, and Alexis Sanchez signed a new contract at Arsenal, which is a nice thought.

Coming up to squad selection and surprise, surprise there are injury concerns over Walcott. I’ll likely select him anyway but I hope this save can be less reflective of real life with regards to Walcott and Wilshere. Smalling will be missing out on this friendly due to a hernia, which is handy because I forgot to call up three keepers before that – Ben Foster will also be coming along as it turns out (don’t let him know we forgot about him, he’s a sensitive lad).

I have let Wayne Rooney retain the captaincy for now, with Henderson taking the vice role. Here is how we will be lining up against Isreal in Haifa baring in mind we have Slovenia away in a couple of days.

No idea about Haifa so had a quick google so I could get together some quick cultural activities for the team, there’s some nice gardens and a science museum, so something for all of us, I imagine Lallana loves a nice garden (it’s about thirty Celsius so I’ll get some sun cream in) and I can teach Wazza about Newton’s laws of motion.

That’ll all have to wait till after the game however, with the incentive of no ice cream if they lose, the lads should be up for this. Catch you after the game.

That was… mixed… a 2-1 win but hardly a convincing performance or result, a lot of players under-performing, classic England problem. The two standout performers for us this game were definitely Dele Alli and Jordan Henderson, whilst I was concerned with Jesse Lingard and John Stones.

During the match I was forced into an early change due to Sturridge picking up a head injury, bringing on Rooney. I changed him to a False 9 and Alli to a Shadow Striker which seemed to work for Alli, less so for Rooney. John Stones seemed to get caught out by long balls in behind him aimed at Hemed, whilst this may just be due to Isreal’s style of play, it may be worth keeping an eye on as Stones is firmly in my first team plans. Lingard’s lack of involvement means I am dropping him in favour of Sterling for the coming game against Slovenia.

Lessons to be learnt going into the next game, one with much more at stake. Will I be the most loved, or the most loathed man in England? Find out next time!

You Are Not So Smart
AmbiGaming

Understanding Virtual Worlds Through a Lens of Reality

A Washed-Up Athlete with a love for video games. Video Games, Football, and whatever else comes to mind!

Seem to have forsaken chronicling the virtual multiverse in order to develop games...OH WELL!

Art as Games
From Eleven, One